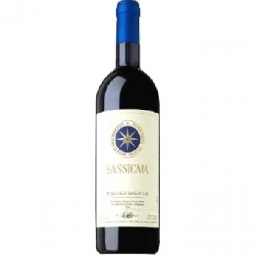 ĎSassicaiaí means Ďplace of many stonesí in reference to the gravelly soil of its vineyards, similar to those found in the Mťdoc and Graves Ė an ideal terroir for the Bordeaux varieties that are now planted at the estate. When the vineyards expanded to 75 hectares in the 1960s, a new winery was built near the church of San Guido. This included the installation of new equipment such as temperature-controlled stainless steel vats for separate fermentation of harvest lots, and new French oak barriques.

A modest 15,000 cases of Sassicaia are produced each vintage. The wine is aged for 24 months in oak (one third of which is new) and then bottle-aged for 6 months before release onto the market.

The estateís second and third wines, Guidalberto and Le Difese, both contain Sangiovese and, as they are intended to be younger drinking wines, are aged for a shorter time than Sassicaia.

Sassicaia 1985 is considered to be one of the greatest wines of the 20th century with Robert Parker awarding it 100 points.


Do you have questions about our products? Publish here your question and our team will answer you as soon as possible.